RCL - The extended Green Line coach version of the Routemaster (1965) 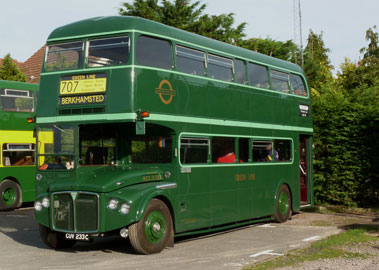 The RCL was introduced initially to take over routes 715A, 721, 722, 723 and 726 from the old RFs and RTs although many people considered it an expensive gamble by London Transport.

The main motive was an attempt to attract travellers out of their cars and back onto public transport by providing what they called 'private car comfort'. There is no doubt that they were the most comfortable Routemaster model produced but they were fighting a losing battle with route 715A being returned to single deck RF operation within a year.

Like the RMCs, they had a special livery, twin headlamps and electrically operated platform doors plus the more comfortable seats and luggage racks.

They also received the larger 11.3 litre engine, partly to offset the greater weight but also to give smoother running at higher speeds.