RMF - The only Routemasters built for service outside London (1964/5) 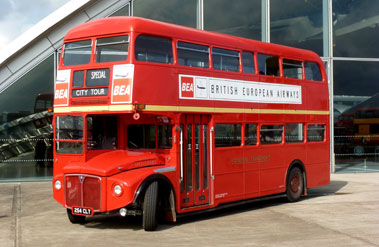 The order for Routemasters from Northern General was unexpected since they had not shown any previous interest in the model.

However, 50 were ordered and they began entering service from May 1964.

There were many detail differences in specification from the usual London requirements such as one-piece non-opening windscreen, sliding window ventilators, fluorescent interior lights and their own pattern of seat frames. Mechanically, they had Leyland engines, a Monocontrol semi-automatic gearbox with no fully automatic setting and a worm driven rear axle as opposed to the usual spiral-bevel type used by LT.