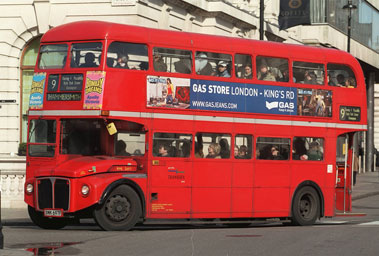 The RML is the high capacity version of the Routemaster designed for the major central London routes. The extra capacity was obtained by adding a 2ft 4in bay in the centre of the body and is instantly recognisable due to the square windows that rather look like an afterthought (which, of course, they were!).

RMLs 880-903 were the experimental batch which were subsequently followed by the main batch of 500 vehicles (2261 to 2760). The last one of all, RML2760, is being maintained in original condition at Upton Park garage and is still made up of its original body and sub-frames.

The RML was also the ultimate in terms of the bus weight per passenger which, at a mere 240 lbs (compared to the standard RM's 257 lbs), is lighter than most modern buses and endowed it with excellent fuel consumption.